How to go smoothly through winter? With -10% and the following code
SNOW21
(excluding discounted products*).

Danish designer Verner Panton (1926 - 1998) is considered one of the most influential designers of the twentieth century. During his career, this craftsman of Scandinavian design created objects in innovative and futuristic design like the famous Panton Chair, which still inspires avant-garde designers today. His style, typical of the 60s and 70s, is imbued with a great modernity. His iconic and timeless creations have survived the decades without a wrinkle!

He was trained at a technical school in Odense, Denmark as an architectural engineer and then at the Royal Danish Academy of Fine Arts in Copenhagen. He worked in Arne Jacobsen's architectural office from 1950-52, where it was rumored that he was one of the worst workers, ostensibly because he was preoccupied with his own designs. He started his own design office in 1955 and, in that same year, came out with the tubular steel and woven cane Bachelor and Tivoli chairs.

In 1958, his work as the architect for the Applied Art display at the Fredericia Furniture Fair was a harbinger of his non-traditional approach to the tenets of design. Shocking both attendees and artists, he displayed the furniture by hanging it from the ceiling of the stand.

The 1960 stacking Panton chair, the first to be produced from a single piece of molded plastic, brought Panton international recognition with its modern and unexpected form. It was first shown at the Mobilia Club and was awarded an A.I.D. award in 1968. The shape of the chair, a single curve with no extraneous skeleton was designed to give a soft, rather than rigid, support and it was made in a range of bright colors. This series was inspired by Panton's philosophy that a set of furniture should interact with itself as a kind of chair landscape, which refuses to be just functional.

In the late 1960s and early 1970s, Panton experimented with a radical series of upholstered environments. He wanted to encourage people to use their fantasy ideas and make their surroundings more exciting, and to this end, he created the 1963 Flying chair, the 1968 Pantower - an upholstered unit with several levels - and the 1974 upholstered Sitting Wheel. Two chairs he created for Cassina in 1979, Sisters Emmenthaler and the Mrs. Emmenthaler chaise longue were more playful and figurative, imitating the shape of the body.

Panton is also known for his extraordinarily unique and sculptural lighting in plastic and Capiz shells. He employed shells, UFO-like metal and plastic elements, plastic balls and brightly colored or shiny twisted strands of plastic to forward the philosophy set forth by fellow Dane Poul Henningsen that the design of a lamp should obscure the bulb or light source. Some of his most coveted designs from this time include the Wonderlamp, VP Globe, Spiral Lampen, the Fun series and the Flowerpot. The body of work produced by Verner Panton represents one of the most progressive and successful of the 20th century. 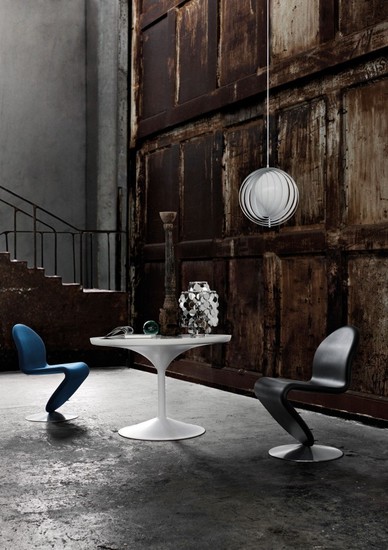 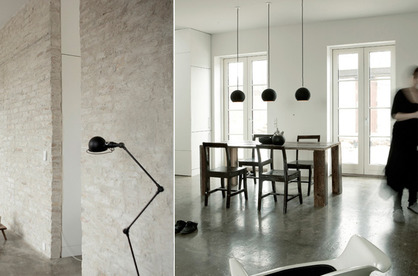 The body of work produced by Verner Panton represents one of the most progressive and successful of the 20th century.
10€ discount
Subscribe to our newsletter